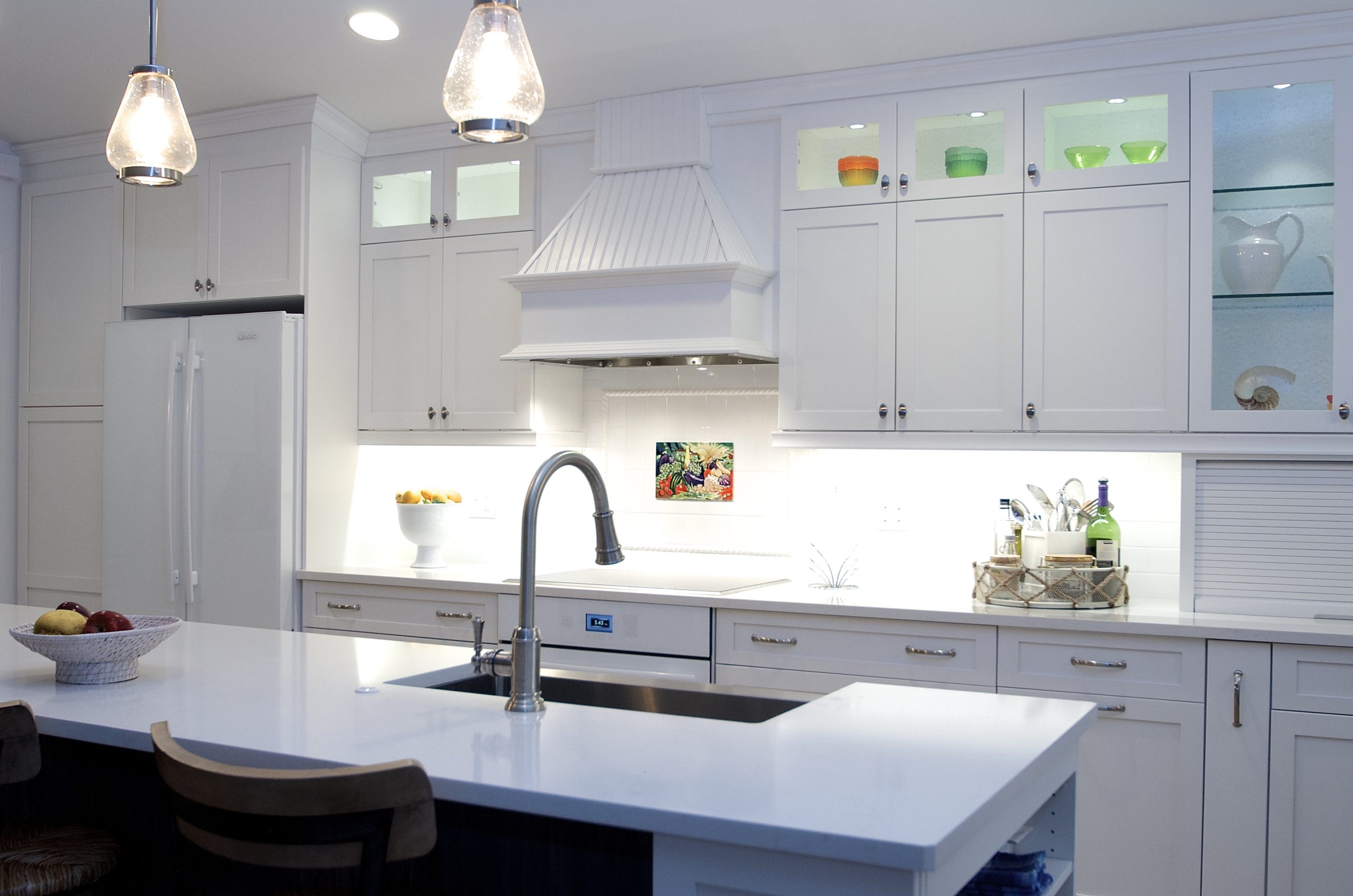 The Lyons were unhappy with their closed off kitchen and asked us to create a white on white, shaker styled open concept layout that would give them more work space.

The Lyons wanted an open concept layout which they couldn’t do with the existing wall. The only option was to tear it down! Tearing down the dividing wall opened up the space and really allowed us to renovate their kitchen to produce a more efficient and beautiful space.

Subway tile was chosen for the kitchen backsplash. Subway tile has been around for over 100 years when it was first introduced in the New York subway station in 1904. It is a timeless piece to use in kitchens. It is versatile, easy to clean, and stain resistant. Not to mention that the colors won’t fade when exposed to light which is a great feature, especially for Florida kitchens.

There were numerous organizational aspects added to the kitchen to make it more functional and efficient. The pull outs and drawers also maximize the space.

The Lyon kitchen featured expansive storage space. As seen in the photos below, the entire kitchen really maximizes its storage space by equipping all the bottom cabinets with pullout drawers and storage spaces.

The kitchen also features pull out waste and recycling bins, a pull out spice rack, and a pull out work bench. 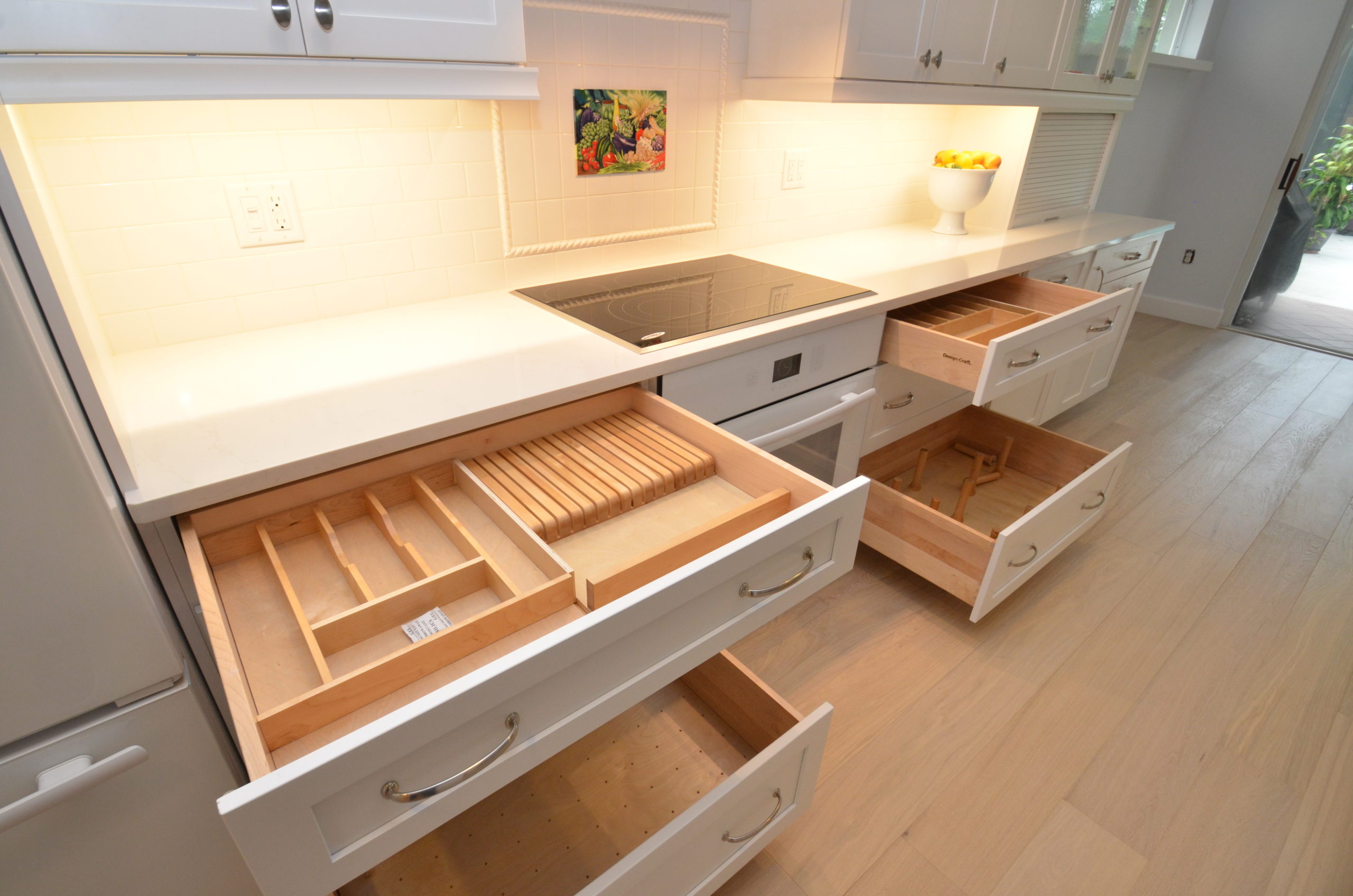 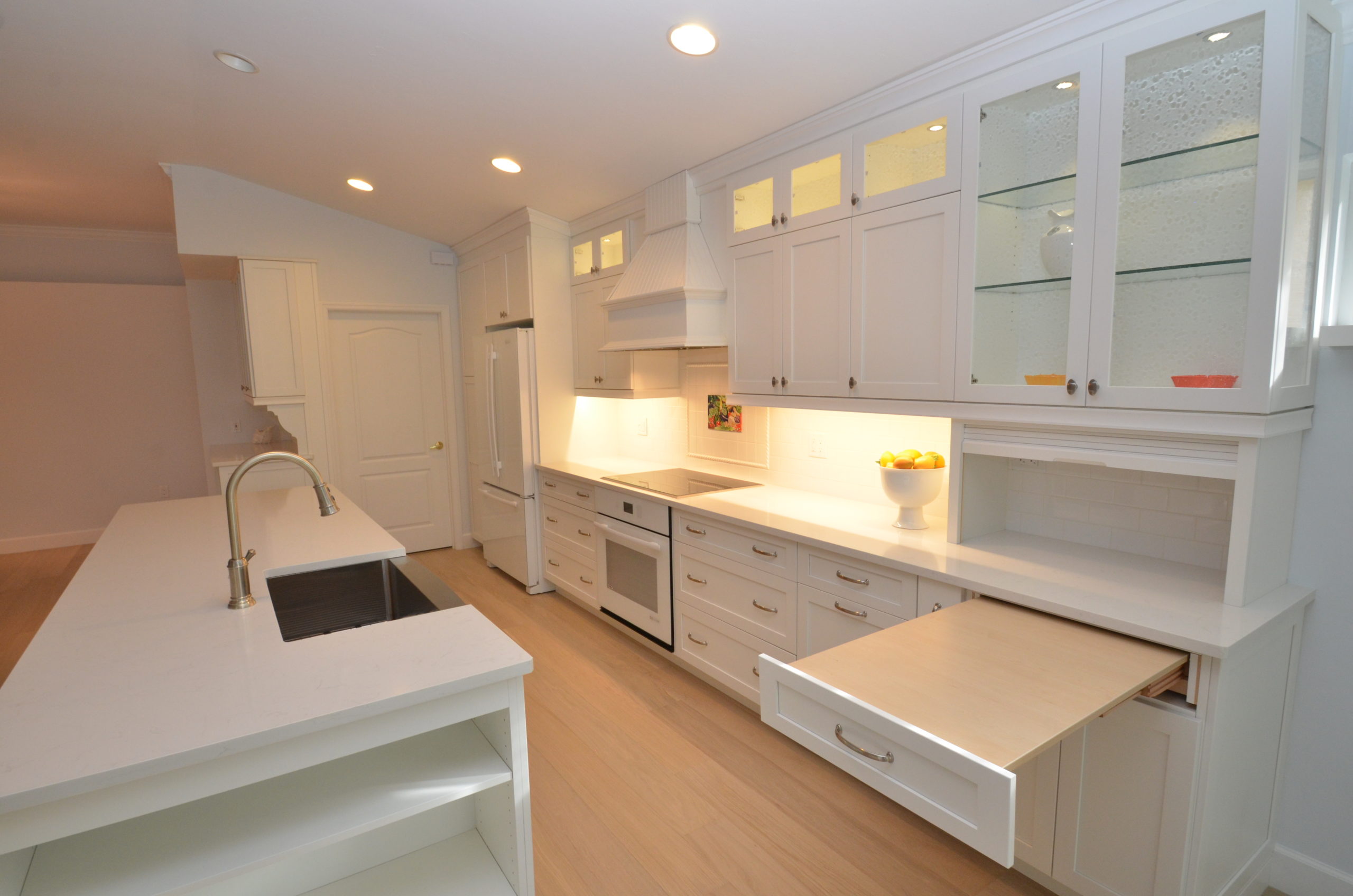 We decided to go with LED lights for the under cabinets because of a wide range of benefits. LED lights are taking over the lighting industry and here’s a few reasons why we love them:

• More energy efficient: use less power per unit of light

• Better for you and the environment: do not contain mercury, 100% recyclable

• Flexible in color and design 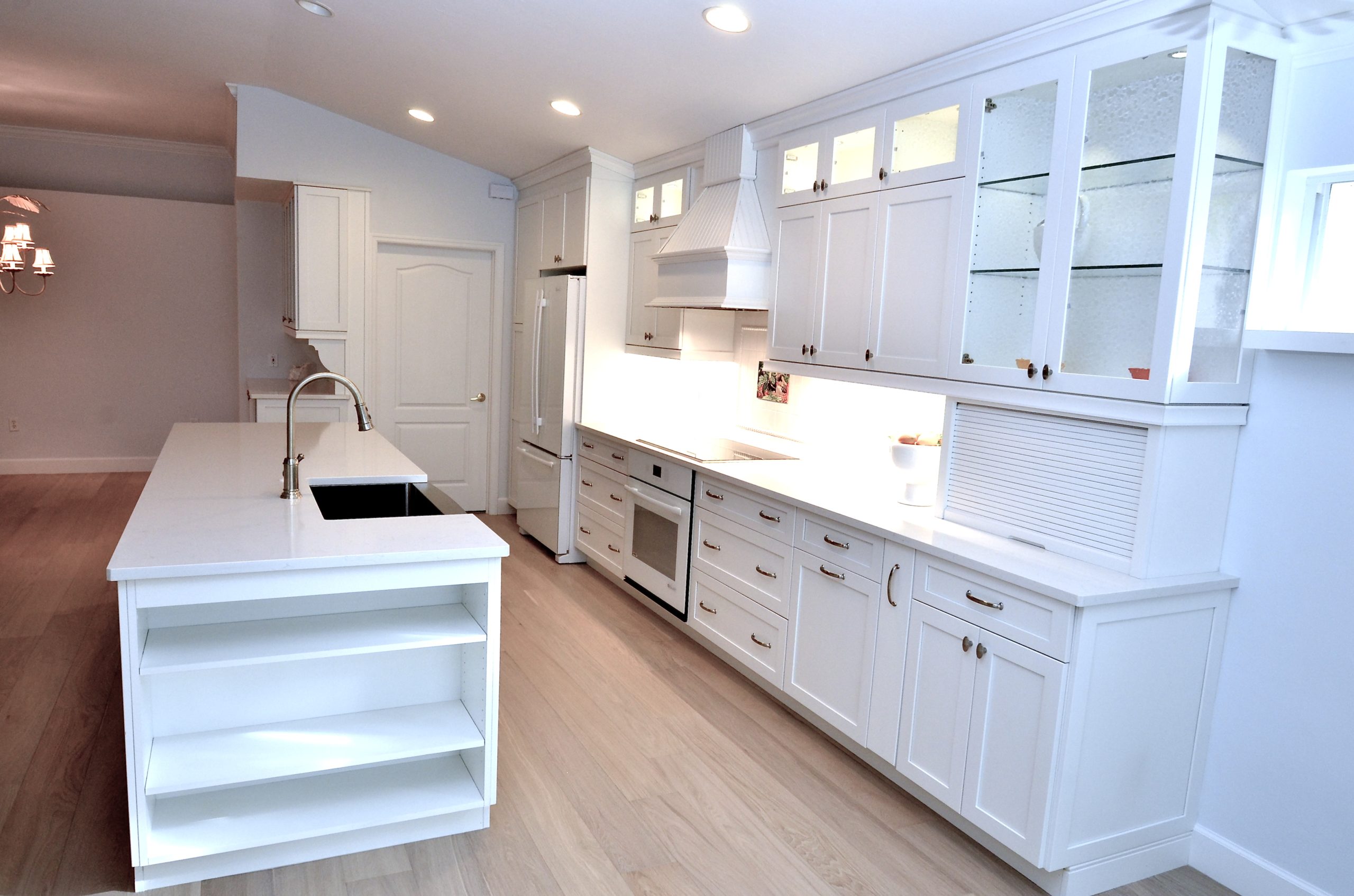 The Lyons project also involved the installation of a garbage disposal air switch. These air switches use air pressure instead of electricity to activate the unit which reduces the potential of electric shock when you have wet hands from washing dishes. It is also more convenient than an electrical switch since it is easier to reach and identify. 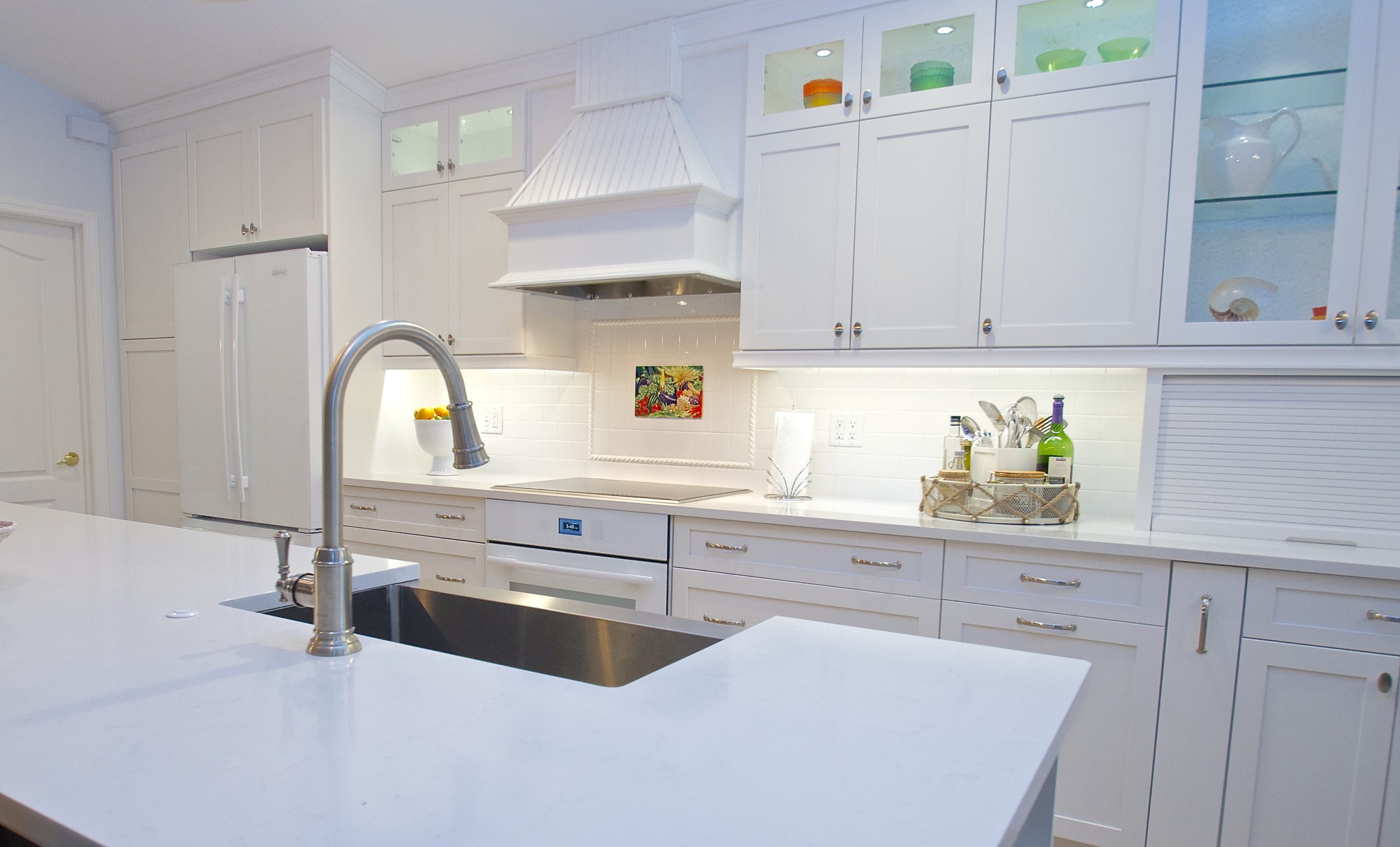 A dry bar was also added to the Lyon project which offered them even more organizational space and function to their kitchen remodel.

Because the Lyons kitchen remodel prioritized maximum storage and efficiency of the space, a kitchen island was imperative. The kitchen island featured quartz countertops, a pull out oven for added convenience, and a farmhouse sink. 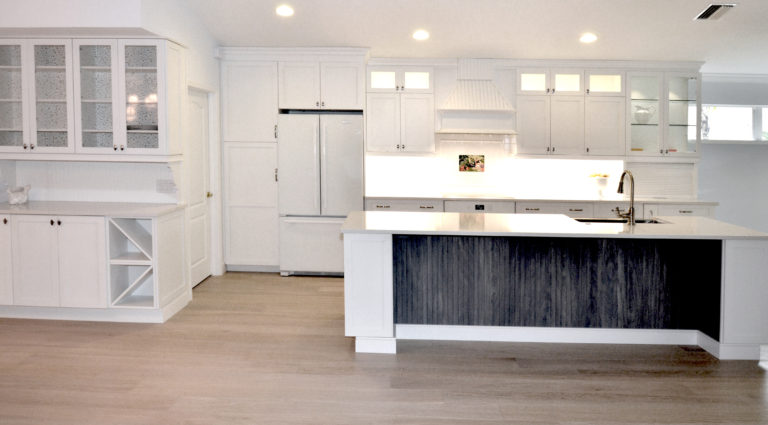 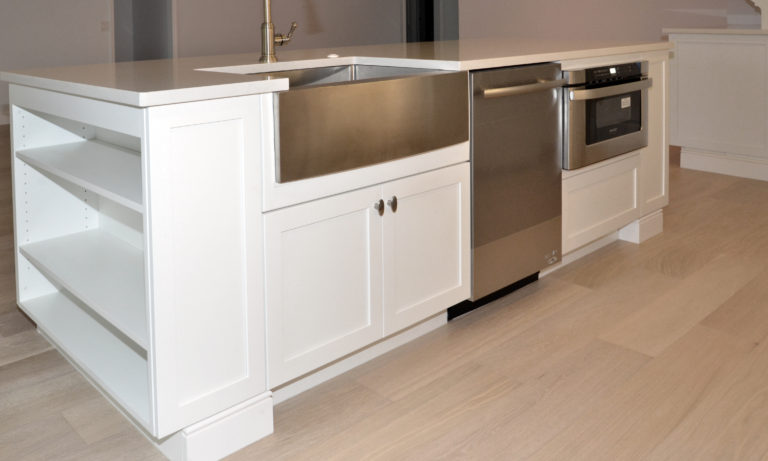